As we traveled through Scotland, listening to music selected by our tour guide Graham Bruce, I imagined this scene. The whiskey flowed and a band—fiddle and accordion—played lively tunes then quieted for a waltz. Partners paired up on the dance floor. Lovers pulled one another close. The guitarist strummed the opening chords of the “Massacre of Glencoe,” a song about betrayal and death noted in last week’s post. Or maybe the waltz was “The Skye Boat Song,” a folk tune with original lyrics based on a poem by Robert Louis Stevenson.

Speed, bonnie boat, like a bird on the wing,
Onward! the sailors cry;
Carry the lad that’s born to be King
Over the sea to Skye.

This song, with lyrics modified from Stevenson’s poem, provides the theme for the wildly popular Starz TV series Outlander, based on the historical novels by Diana Gabaldon. Graham dubbed Outlander “Fifty Shades of Tartan,” but also noted that Gabaldon’s historical research was actually quite good.

Scots love to remember their history of bloodshed, intrigue, and heroism. We saw artifacts from the Neolithic Age at Skara Brae and the Ring of Brodgar in the Orkney Islands then evidence from other invaders and settlers including the Romans and Vikings. Kingdoms, castles, and clan warfare emerged during the medieval period, followed by the Scots’ wars of independence from England. The past was grist for many of the folk songs Graham played for us.

In my imagination, the dancers waltzed and whispered these words:

Loud the winds howl, loud the waves roar,
Thunderclouds rend the air;
Baffled, our foes stand by the shore,
Follow they will not dare.

The Reformation created yet another complication because King James VII of Scotland (also James II of England) was Catholic, though the Scots and English were predominantly Presbyterian and Episcopalian respectively. England’s solution was to offer the throne in 1688 to James’ Protestant, Dutch-born nephew William who was married to James’ daughter Mary. Scotland’s uprisings against William and Mary were called Jacobite rebellions, from the Latin for James Jacobus. 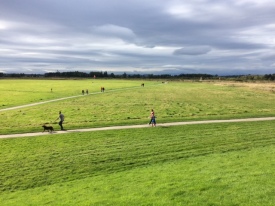 After his father’s death, James VIII/III took up the cause, gaining support from the King of France and the Pope. James’ son Charles—Bonnie Prince Charlie—led the rebels at the Battle of Culloden in 1746. Many Highland clansmen stood against the English on the battlefield, not for religious reasons but to fight for clan and king. Brandishing swords and shields, they raced across the flat lowlands and smashed into a hail of English bullets.

And the lovers dancing in my head sang:

Many’s the lad fought on that day,
Well the claymore could wield,
When the night came, silently lay
Dead on Culloden’s field. 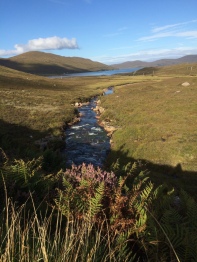 Bonnie Prince Charlie fled and escaped over the sea to Skye. At Culloden, the dead were buried in mass graves marked by their clan names. The Jacobite rebellion ended. Yet many Scots continued to dance and sing of their hopes for independence. In the most recent referendum in 2014, 55% voted no, but 45% answered, “Yes.”

Burned are their homes, exile and death
Scatter the loyal men;
Yet ere the sword cool in the sheath
Charlie will come again.

“Yet ere the sword cool in the sheath,” they sing, “Charlie will come again.”

2 thoughts on “Over the Sea to Skye”