Early last Saturday afternoon, as I walked back up the mountain road from the mailbox, I heard the first rattle of cicadas this year. “Sure sign that the dog days have arrived,” I said to myself. Sweat ran down my face, neck, back and front.

In my mail sack was a rejection letter for an essay I’d submitted months ago. “We received almost 500 submissions, and as you might imagine, it’s a difficult process… we’re very sorry to be writing with the news that your essay is not among the finalists.” 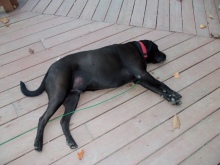 “Dog days” refer to summer’s sultry months of July and August. The phrase dates back to ancient times when Sirius, named the “Dog Star” because it’s part of the constellation Canus Major, rose before or with the sun during the hottest days in the summer. The ancients saw this bright star and associated it with everything from languid behavior, disease and madness.

No, I’m not sick or mad about the rejection, but unlike our dog Heathcliff, I’m not taking this lying down.

Dog days last 40 days from early July to mid August, notes The Old Farmer’s Almanac. “Dog Days bright and clear / indicate a happy year. / But when accompanied by rain, / for better times our hopes are vain,” speaks a common lore. So far this summer, it’s been very wet.

Rain doesn’t dampen the cicadas’ hopeful humming. Though some species, such as the 17-year cicada, only appear at regular intervals, others like the dog day cicada appear every year in mid-summer, rain or shine. As the National Geographic site states, “The insect’s amazing lifestyle has been a source of fascination since ancient times. Several cultures, such as the ancient Chinese, regarded these insects as powerful symbols of rebirth.”

That’s how I regard rejection, as an opportunity to rethink and revise. This summer, I’ll rattle and hum, like the cicadas. Then in the fall I’ll resubmit a better essay somewhere else.